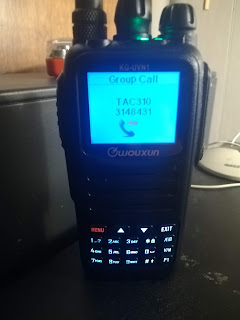 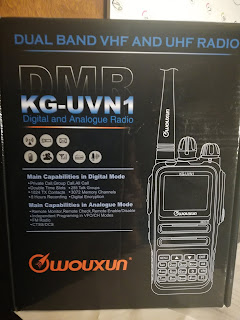 Well Hello DMR Fans, Rick here for DMRShack.com.
Last time, we took a look at the Wouxun KG-D901, today we are looking at the KG-UVN1.

The KG-UVN1 is the Dual Band Hand Held DMR Digital radio from Wouxun.


Lets start with a quick look at the highlights of the radio taken from the Wouxun website:

Now, let me share what I consider the Pro's and Con's based on comparison to the KG-D901.

My overall first impressions of the UVN1 are, it feels like a solid radio, the buttons have a good feel when pressed, firm but not to hard to press and they don't press super easy. Some radios, you can accidentally press buttons just by picking it up.

When I programmed the UVN1 the first time, I noticed Zone's and RX Groups were not being saved to the radio.  I emailed Wouxun and they quickly sent me update programming software. The updated software fixed the issues of No Zones or RX Groups being written to radio.

I have had a few QSO's with the UVN1, and the reports I am getting is the audio sounds great.  I am impressed with the audio reports on both the 901 and the UVN1.

I have mostly used the UVN1 in Digital mode, but I have also had a QSO in analog and have no issues. Works very well.

Programming the UVN1 is pretty straight forward, if you have programmed any DMR radio, it will be nothing you are not already use to. Fairly similar to any other radio including the 901, the TYT MD-380 or the Radioddity GD-77.

In my closing thoughts, I will say, as I mentioned in the review of the 901, I think Wouxun makes a great radio, and they could very well become a competitor in the DMR Radio market.

Since acquiring the 901 and the UVN1, I notice Wouxun has added two additional DMR radios to their line up.  The 2 newest ones are models without a display.  Wouxun now offers six DMR radio's.

I really do believe Wouxun could be a competitor in the DMR arena, the radios are well built, solid and sound great.

I would really love to try one of the Wouxun Radios without a display next....But I can't buy every radio. Hi Hi :-)

Baudwalk said…
What is the codeplug file format? RDT? I wonder if the N0GSG Contact Manager software can manipulate the file. Thanks.
- de W2XQ
August 21, 2019 at 6:55 AM

Popular posts from this blog 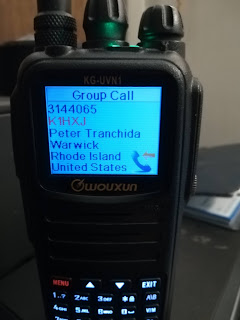 The Wouxun KG-UVN1 now supports the DMR User Database. Hello DMR Fans, Rick here, KG7GUO for DmrShack.com.  I have some very exciting news for you. Wouxun has updated the Firmware for the KG-UVN1 and the Programming Software, I am pleased to announce, the KG-UVN1 now supports the DMR User Database. It will now allow 160,000 DMR User Contacts, and 10,000 TX (Talk Group) contacts. This is an awesome update. To make this possible, they reduced the record time for recording call audio from 8 hours down to 2 hours, which is not a big deal, because how often do you need to record your calls anyway?  I don't ever have a need to use this feature, but some may like it. This update pretty much makes the UVN1 my favorite radio of the radios I own. The import process is pretty simple and straight forward. From the programming software, simply click on program and select Dmr Database. Click on Import and select the file you want to import.  I
Read more

What should my Admit Criteria be set to? 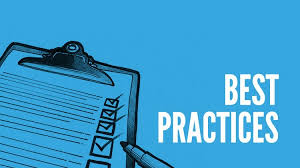 What should my Admit Criteria be set to on my DMR Radio? Great question, and I am glad you asked.  I will give you what I like to call the Best Practice. Typically there are Three options in the Programming software for Admit Criteria on most if not all DMR radios. Let's take a look at the three options, then we will break down each one. Always Channel Free Color Code Always: If you set your admit criteria to Always, what this is gonna do is set your radio so you can key the mic at any time, regardless of other traffic or conversations (QSO's) that may be in progress. Selecting this option would NOT be a Best Practice.  A courtesy Amateur radio operator is not one who wants to deliberately talk over the top of someone else.  This would remind me of the old CB radio days when you had the "Big Strapper's" out there that would like to key up and say "Squish" Yes, I am an old CB'er, but no, I was not one of those people.
Read more